From the Route Lister in the Pyrenees, Francesco Guerri

September 24th, 1940: a man walks up an old smuggler path in the Eastern Pyrenees. He walks slowly, stopping every then minutes to rest for a minute. With him, he’s got an old heavy leather briefcase. When his guide asks him what’s inside, he answers her that it contains his latest work and that it is more important than his life, he can’t have it lost.

That man is Walter Benjamin, German-jew philosopher running from the Nazis. He’s crossing the border between France and Spain. The day after he’s arrested in Port Bou, that same night he’s found dead in his room. His briefcase never to be found.

July 3rd, 2010: seventy years later, one, two, three, ten shadows walk along the same path. They move from Port-Vendres along the Lister Route, the same used by the Republicans running from General Franco dictatorship. They find camp in the Pyreenes, they play a cello, hide and old briefcase, they spend the night telling stories. They’ll get to Port Bou: that is the Benjamin Briefcase Project. A project on site/online/on air to remember Walter Benjamin seventy years after his death and all those people that, just like him, crossed and have been crossing national borders as clandestines.

The project has two dimensions:

ON SITE:? On July 3rd, 2010 a group of researchers, videomakers, musicians, architects, photographers, directors, friends follow the pathway walked by Luisa Fittko, the woman who helped Benjamin crossing the border looking for the same place where Banjamin spent his last night.

There, cellist Francesco Guerri performed for Walter Benjamin and in there they dug a briefcase just like the one the philosopher’s walked with.  In the night of July 3rd, 2011 Radio Papesse streamed LIVE from the Route Lister in the Pyrenees Francesco Guerri’s cello concert. 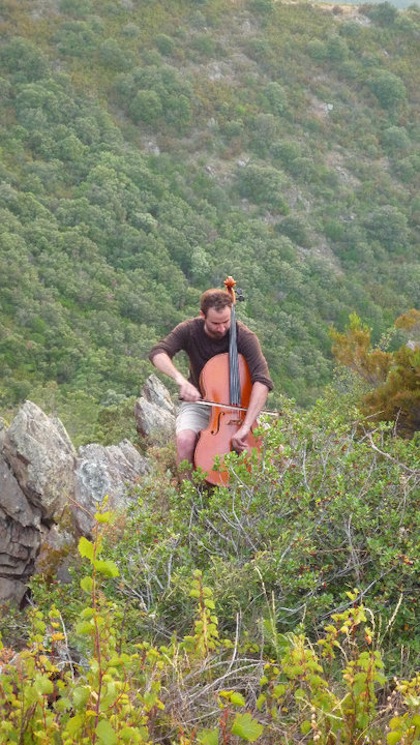