The track by beepblip was recorded live on Sound Topographies Festival at Škuc Gallery, on 1 October 2017, by an invitation of the festival’s curator Nina Dragičević. The track is based on various field recordings, which in their raw form often sound quite piercing for the ear.

Field recordings are most interesting for the person who finds them, in simultaneity with the sound-event, in direct contact with the sound-field source. Such encounters are marked by an element of surprise in a unique event, a non reproducible moment in time. With repetition this moment becomes an object in the archive of memory, of something known and transmittable. In my relation to sound, the element of the unexpected plays a significant role, as though I am making sounds in the tension between repetition and surprise.

The track plays with various frequencies in audio or electromagnetic spectrums, which are outside the range of a human hearing. Often, such frequencies come in extremely high and sharp form, when they are transposed to the human hearing range. These are exactly the frequencies that attract me most. I am producing such sound in an attempt to shift the flow of conscious thinking.  In this way, the production of such persistent sounds is political, because they nullify the capacity to be productive and efficient; the two imperatives imposed by capitalist mode of reproduction. At the same time, these sounds are not particularly entertaining, and they offer relaxation only to the people who refuse to be relaxed in an anesthetic way. The track ideally works as a jammer for thought pollution.

A few words about field recording. In the immediacy of listening when recording, I am using amplifiers, catchers of frequencies, different antennas, coils, transducers. I record either outside of the hearing range, either in the electromagnetic fields or on the radio frequencies outside of the advertisement-polluted FM (AM or VHF). To walk through space with headphones and an amplifier of sort is like floating in some virtual inter-space, which is not connected to online or digital virtuality, but a virtual space on the level of electromagnetic waves, for example. In my utopian thinking, I imagine that computers and the web are not optimal carriers of virtuality. If we are ever to develop interfaces, which are more comfortable for our human bodies, we would have to invent new way of virtualisation. I am not interested only in producing sound compositions, but propose sounds, which would say something about the future. As a representative of contemporary cognitariat I feel flattened in two dimensions of a computer screen. And sometimes I am in awe with the 3D world with its forms and possibilities. An ordinary view of the world is virtual reality to me. My listening of electromagnetic waves is a way of opening the virtual space into more spatial and temporal dimensions.

The track consists of modified fragments recorded with a radio receiver on AM waves. Mostly they are without narration, and sometimes a word or a melody creeps in. I listen to these tracks like they would be arias of some sort. The tracks also consists of sound layers recorded with a coil for sound detection of electromagnetic waves. These recordings were mostly taken in 2013 and 2014 in New York City, where the EM waves are omnipresent. This part of the recordings is also the reason to call this track Underground Acceleration. What interests me in this sound layer is the tension of constant acceleration with few releases. This constant electromagnetic tension works like an illustration of capitalist depletion and accelerationism.

There is also a really beautiful example or an acoustic citation of light installation by Kurt Laurenz Theinert: Gespinst, exhibited a few years ago at the Lighting Guerrilla Festival in Ljubljana. In addition to these field recordings, there are also several sound levels produced live with analogue electronic synthesisers.

For the conclusion, perhaps a short explanation of the title AMonFM. Not only are some AM transmissions now channeled on radia-FM, the FM in this case is also the Shape of a dozen of analogue patches. 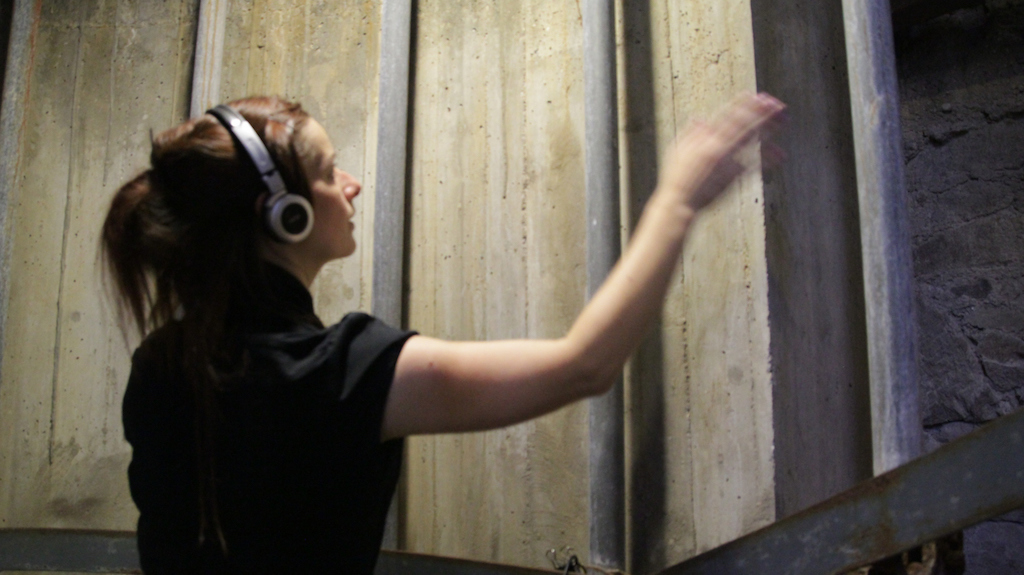