synclastic [s???klæst?k] adj
(Mathematics) Maths (of a surface) having a curvature at a given point and in a particular direction that is of the same sign as the curvature at that point in perpendicular direction.
[from syn- (alike) + Greek klastos bent, from klan to bend]

anticlastic [?ænt??klæst?k] adj
(Mathematics) Maths (of a surface) having a curvature, at a given point and in a particular direction, that is of the opposite sign to the curvature at that point in a perpendicular direction.
Collins English Dictionary ©HarperCollins Publishers 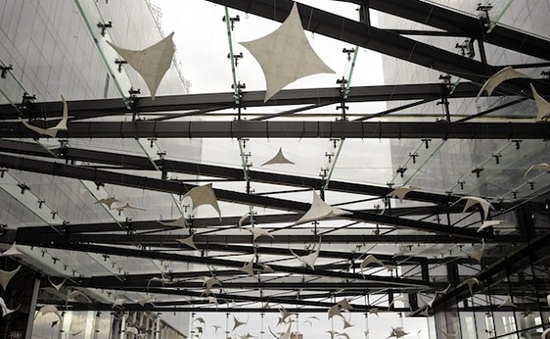 Hector Zamora is the only artist – among the many invited by Lorenzo Fusi in Liverpool for the Biennale – to work in a brand new venue, by occupying the aerial space between two buildings under construction at Mann Island.

We talked about his recent work Synclastic, Anticlastic, tracing back some comments and notes to his Sciame di dirigibili – the spectacular zeppeling piece – presented at the Biennale di Venezia in 2009.

Working across a variety of media, Héctor Zamora (b. 1974, Mexico) intervenes in the social and physical structures of urban spaces. His works draw on extensive research into specific socio-political topographies, while also playing on the inhabitants' collective memories, myths and desires.