Alfredo Jaar - The beauty of commitment*

The first time Alfredo Jaar went to Rwanda was in 1994, just a few months later the beginning of one of the most vicious genocide ever, the mass murdering of more than 800,000 people - most of them were Hutus - when the scale and the speed of such a slaugher had been underestimated and even ignored by the international community and 100 days of violence - after the Rwandan President Juvenal Habyarimana's plane was shot down above Kigali airport on 6 April 1994 - had left the country in a total civil and political disarray.


Since then to 2000, Jaar's Ruanda Project counted 25 works, among which the most known still is The eyes of Gutete Emerita (1996). After 10 years he is eventually back on Rwandan tragedy, presenting the video We wish to inform you that we didn't know, an eloquent and more than ever sharp comment on the shameful indifference of the western world in the face of the atrocities perpetrated in just 100 days.

The three channel video is a mush up of video testimonies of Rwandan survivors, extracts of international newcasts, Radio Libre Milles Collines audio excerpts and images of spontaneous rwandan memorials. The self explanatory comment on the evidences of the international lack of effort is the cinical apologetic remark Clinton claimed in 1998 in Kigali.
Looping on of the most hypocritical passages of the speech, Jaar reclaims that "the 800-pound gorilla that sits where it wants and can bend others to its will" should have invoked a more urgent response to the crime within the international politica agenda.

We met Jaar and we talked about the moral compass for intellectuals to state things as they are, to create spaces that can promote changes in cultural approach to politics, that is also the reason behind his second project for the Biennial, The Marx Lounge, a platform for audiences to access an extensive archive of books based and focusing on Marx’s ideas and on those new seminal texts that, taking Marx as a starting point, rewrite new political grammars. 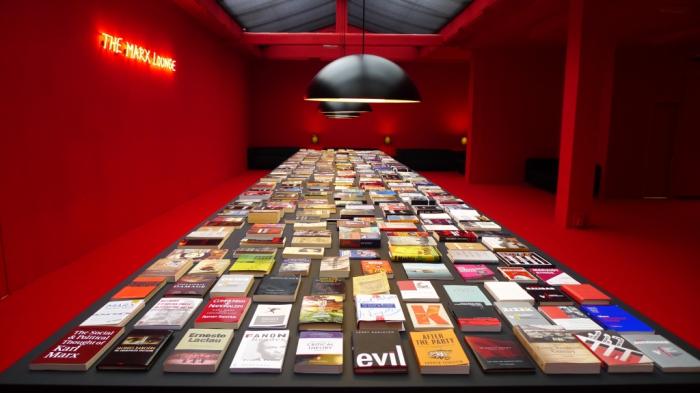 If you feel to know more about Rwandan genocide, its premises and legacies, here you may find an interesting interview to Philip Gourevitch, author of the book We Wish To Inform You That Tomorrow We Will Be Killed With Our Families.

The integral Bill Clinton's remark in Kigali is available on the website of the Miller Center of Public Affair.

News from Nowhere Bookshop is a miracle, as Jaar claims; it is the indipendent bookshop in Liverpool he collaborated with in order to select the books for The Marx Lounge. Most of them are published by Verso Books, one of the most well estimated radical publishng house in the English-speaking world, that turns 40 this year. Verso Books is project sponsor of The Marx Lounge.

*The beauty of commitment is the title of the conference Alfredo Jaar, Will Kwan, the Freee Collective and Lorenzo Fusi took part into, last September 18th 2010 at the Liverpool John Moore University Art and Design Academy.

Alfredo Jaar, We wish to inform you that we didn't know, video still, 2010
seeking
Browse the website and click to create your personal playlist.