Edgardo Rudnitzky was born in Buenos Aires in 1965. He is a composer, a sound artist and a percussionist. He has been involved in theatre as sound designer for theatrical settings, contemporary dance and also for films. Among his various collaborations with artists, we would like to point the one with the Argentinian artist Jorge Macchi out.

As Macchi recently told us, they first met on stage – it was the late ‘90s – and Edgardo gave him that sense of collaboration, typical in theatrical production, that was completely out of his mind at that time. Ever since they have been worked together and always kept the visual and the sound components of a work being complementary and at the same level: just to mention some of their collaborations, in 2004 they worked on an unconventional Buenos Aires tourist guide, in 2005 they were commissioned to represent Argentina at the Venice Biennale, in 2008 they were invited to work in New Orleans for Prospect 1. 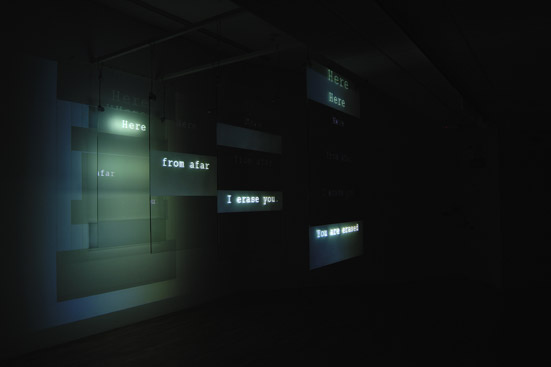 This piece - Singer's Room - was produced in 2006 as part of a video projection on four glasses and whispering windows audio system and together with Twilight, it is part of the project Light Music commissioned by University of Essex, in collaboration with visual artist Jorge Macchi.

The musical score is for four female voices.

White letters of a deconstructed poems are projected on four layers of glass, being the installation piece singing the English phonetic spelling of the letters every time they appear onto - or slip out - the glass and playing with the idea of erasing a text.