If I wasn't Muslim

Damir Niksic turns the tragedies of the Balkans into a musical and makes us reflect on the condition of the Muslims in Bosnia-Herzegovina. The video (2004) is part of System Error: War is a Force That give us meaning at the Palazzo delle Papesse Contemporary Art in Siena.

Damir Nikši?, 1970, is a musician, a conceptual artist and a political activist from Bosnia Herzegovina. His best known art work is a seven-minute-long video entitled If I Wasn't Muslim (2005). He was also co-founder and member (vocal singer) of rhythm and blues band Sing Sing. The band played four concerts in CDA Mladost. In 2000 he acquired BFA degree from Sarajevo Academy of Fine Arts and moved as a graduate student to Indiana, Pennsylvania, USA. In 2001 moved to Tucson, Arizona where he graduated at the University of Arizona in May 2004. 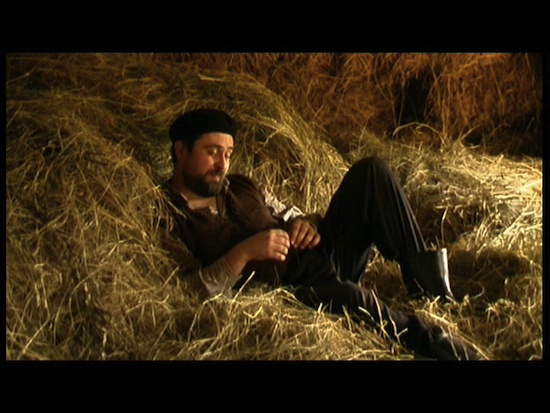 If I wasn’t Muslim

I could live and prosper
On my land and I could even build a bigger house
I wouldn’t have to, every now and then,
Run and hide like a mouse.

If I wasn’t Muslim
Ya ha deedle deedle, bubba bubba deedle deedle dum.
My neighbors wouldn’t set my home on fire
And surround me with barbed wire

I would not have to prove that I am not stupid
A backward and primitive villain
An alien threat to your way of life
to be hunted down.

My tradition wouldn’t insult
My Christian neighbors and friends
My diet, my cap, the Ramadan fast
the crescent and the star.

Bayram, I know, will never be famous
like Christmas or Easter Sunday
so modern and cool, so western,
and - oh so “secular”.

I would be accepted
Ya ha deedle deedle, bubba bubba deedle deedle dum.
I’d blend in to Europe and enjoy
I wouldn’t be its whipping boy.

If I were a Christian
I wouldn’t have to prove that I am human too.
‘Cause when you’re Christian you’re always civilized
no matter what you wear or do.

But when you are a Muslim
It is really hard to find some sympathy for you
No one really likes you, no one really cares
No one wants to know your point of view.

If I wasn’t Muslim
Ya ha deedle deedle, bubba bubba deedle deedle dum.
If I was a part of Christendom
Europe would be my sweet home.

I wouldn’t have to worry
Ya ha deedle deedle, bubba bubba deedle deedle dum.
What will happen in a year or two
Will I have to leave or stay and die
Drop my pants to be identified and put aside
Just ‘cause I’m a Mussulman?