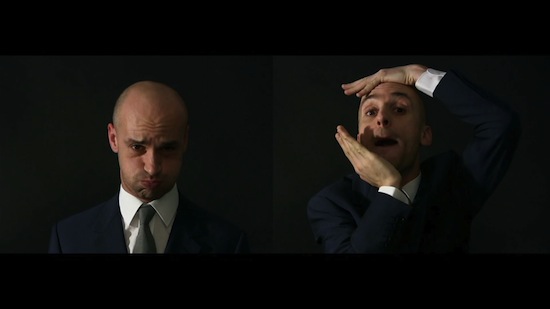 In esimorP, Mikhail Karikis draws inspiration from oaths to secrecy and confidentiality practiced in the financial markets and creates a work for a performer who appears in the role of a suited male banker. The piece explores the idea of promising to keep one?s lips sealed by inversing the order of events, that is: the vocalist?s task is to make a promise but his lips are already sealed. Unable to open his lips to pronounce the word promise, the vocalist swells up with air, his face and neck change dramatically.

In the struggle to find release, the voice subjects the body to disfiguration – the face turns red and the facial features become distorted. Repeated attempts to speak puncture the seal of the lips to produce the noisy sound of p. The composition continues to build up the word promise when suddenly the performer, as if by recollection, begins to imitate the sounds of a malfunctioning tape machine modulating the pitch, direction and speed of the utterance promise me.

This sheds different light on the demanding utterance promise me; the semi-mechanised me, voiced by the performer lets the listener speculate about who the owner of this demand, and what the circumstances of its disturbing internalization by the singer might be.