Chorus of Refuge is a sound installation that transmits the stories of six refugees, living in different cities across the U.S. to six radios. The voices of the refugees are superimposed and coordinated in both rhythm and tonality to unite their narratives of struggle, survival and triumph. This sound installation was created in collaboration with Free103point9, as part of the Wave Farm Artist Residency.
What you can listen to here is a stereo redudx of the six-channel installation. 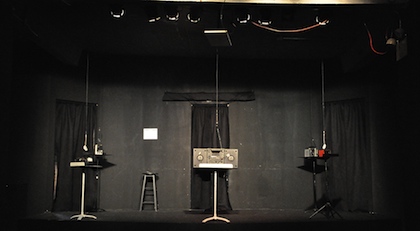 Ann Heppermann and Kara Oehler are Peabody-award winning public radio producers and media artists based in Brooklyn and Boston. Their stories and long-form documentaries have aired on public radio shows including: This American Life, Morning Edition, Weekend America, BBC, CBC, RadioLab and others. Their radio stories and media projects have won Peabody, RTNDA Edward R. Murrow, NFCB Golden Reel, PRNDI, Associated Press and Third Coast International Audio Festival (TCIAF) awards. Individually and collectively, their work has been exhibited at Museum of Modern Art (MoMA), UnionDocs and Conflux, among other venues.

Jason Cady is a composer of dramatic vocal works and experimental chamber music. His focus on the voice coincides with his interest in combining media. In his recent operas, he has set colloquial American vernacular, canned laughter, and Foley sound effects within the context of Baroque operatic forms to reveal the unexpected in the mundane. He studied composition with Alvin Lucier and Anthony Braxton, Richard Lerman and Harold Budd. He currently lives in Brooklyn, New York.