For Radio Epode - a radio broadcast program curated by Tobi Maier in the context of Principle Hope, a group show conceived by Adam Budak for Manifesta7 - Falke Pisano presents 29 decisions for a time capsule radio piece.

..29 decisions for a time capsule radio piece formulates in 29 decisions a text for a sound piece that is at the same time a plan for a future work that could be read as a subjective de-chronologized history of modern and contemporary sculpture: the text that is formulated by the decisions is a description of a sequence of events based on writing about sculpture from the last 50 years. [Falke Pisano]. 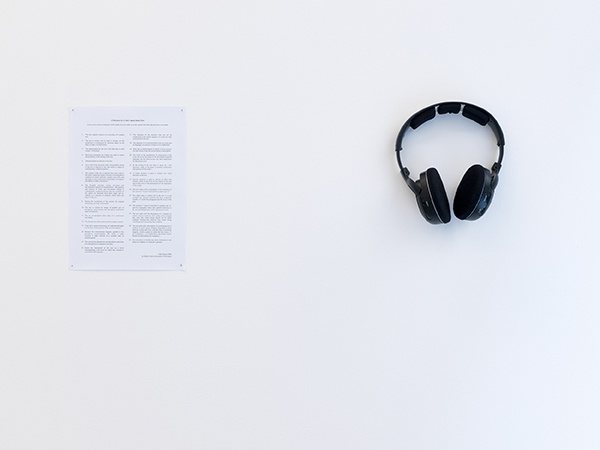 In the course of the development of this audio piece for radio as a time capsule, the following decisions were made:

1 - The time capsule consists of a recording of a spoken text
2 - The text is written with in mind a concept, yet the actual text is constructed by decisions taken on the basis of what is written before.
3 - The starting-point for the text is the idea that it could contain ‘everything’.
4 - Decisions concerning the content are made to ensure the possibility of the writing of the text.
5 - These decisions are left out of the text.
6 - As a result of the decisions made, the possible content of the text is reduced to only that which is related to contemporary sculptural practice.
7 - The content of the text is derived from texts read by the author spanning roughly 50 years of writing about sculpture by artists, theorists, curators and critics and the author’s active and passive knowledge of sculpture and ability to make connections.
8 - The thoughts, concepts, actions, processes and developments, aspects of interpretations – and qualities and features of works and movements related to contemporary sculptural practice that are available to the author are detached from their origin and re-ordered in a structure of relations which forms the basis for the text.
9 - During the re-ordering of the content the original chronology and time is discarded.
10 - The text is written by means of parallel acts of perception, concretization and description, performed upon the structure.
11 - The act of perception takes place in a continuous movement.
12 - The abstractions that are perceived are made concrete.
13 - Time and a certain chronology are implemented again on the basis of the linearity of the act of perception.
14 - Because the concretization happens, parallel to the perception, uninterruptedly, that which is made concrete is made concrete in a constant state of transformation.
15 - The concretized abstractions are described in the form of a description of a sequence of events.
16 - Issues are represented in the text on a level corresponding to the level on which they existed or were dealt with originally.
17 - The elements of the structure that can not be concretized in the actual sequence of events are only concretized in the text.
18 - The sequence of events described in the text exists just as language; no context or frame is ever established.
19 - What can or cannot happen in reality is of no concern; the only limits of the text are the limits of description.
20 - The limits of the possibilities of construction of the event are set by the limits of the developed sculptural language, but this does not have the same implication for the actual event.
21 - In the writing of the text there is space for a few decisions, made on the basis of personal preferences and opinions of the author.
22 - A certain freedom is taken to enhance the visual spectacle of the text.
23 - Specific attention is paid to matters of affect and emotion, both on the level of the content of the text and on the level of the anticipation of the experience of the reader.
24 - The text starts with a description of the utterance of the sentence “I wasn’t interested in sculpture per se”.
25 - The object plays a central role in the text; it is not ascribed any inherent qualities and thus completely instable; it is both the protagonist and the locus of the plot.
26 - The sentence ‘I wasn’t interested in sculpture per se’ and the rectangular object have parallel functions in the text and the grammar of the sequence of events.
27 - The text ends with the description of a situation in which someone mentions that certain artists thought that what they where doing should not be called sculpture because they believed they where doing something more interesting than sculpture.
28 - The text ends with a description of a performance by a sculptor in which a poet, obliquely suspended in space between ceiling and floor with the help of powerful magnets, recites a poem in which the line occurs: “I am a sculpture […] I would like to see all the nuclear bombs on earth turned into sculptures.”
29 - The text does not include any direct references to the future of sculpture or visual art in general.


Falke Pisano (Amsterdam) lives and works in Berlin. Her diagrammatic works expose a loop, in which shifting abstract sculptural forms are conceived directly in relation to written and spoken language, implying an ongoing and morphing production of meaning. In the publication Figures of Speech (designed and co-edited by Will Holder, published by JRP-Ringier, Christoph Keller Editions, 2010) Pisano brought together her work focusing on the act of speech in relation to different forms of agency in artistic production. The artist second cycle of works (2011-) The Body in Crisis consists of a series of propositions and inquiries that look at the body in crisis as an ongoing event.