Sarah Morris - Meet me at the Four Season Restaurant

I'm not so much interested in architecture, believe it or not. I'm really interested in using architecture as a means for cinema, as a sort of cinematic fantasy and what I’m interested in is his (Philip Johnson’s) role in relation to art: he was a powerbroker, a real networker, which is why that roll index scene in the film, Points on a line, is so important, because he really ammassed a large sense of introducing people, of enabling people to sort of become themeselves and in the best possible way.

I know that there is a lot of people who detests Philip Johnson because he really did have a lot of power, we was very powerful at the Museum of Modern Art for like many many decades and there is of course his history of the 30s which is very problematic but aside from that he was somebody, if you think about it, who enabled America to have the image that it now has and this image is built and created by one man's idea which is Mies van der Rohe and when Mies van der Rohe did this drawings in the 20s of glass skyscrapers he was only able to envision them there in Germany but he actually built them in America and this became the physical reality of America and now it is the physical reality of the entire world. But this is fascinating: this sort of lineage of the connections between very specific people; not vague ideas not abstract but very specific set of relations; Philip Johnson asked Mies van der Rohe to design his appartment in New York in the late 20s when he was still a student and Johnson had a prevision of what could be and he had a real eye for talent both in the art world and of course in architecture. [Sarah Morris]

Philip Johnson is not the greatest architect of our time. If very few people credit him a leading architectural talent - he's been often accused of stealing other's ideas - many can't deny how influencial and powerful he's been for almost a century. He invented the term International style on the occasion of the exhibition he curated at the MOMA in 1932; he categorized those features common to Modernism across the world, together with Alfred Barr introduced Josef Albers to the newly founded Black Muntain College, he was the bridge between America and the Bauhaus, he supported many great architects who - thanks to his patronage - could shape the modern face of America.

Philip Johnson, together with Mies van der Rohe is the grand watermark figure behind Points on a line, a new video by Sarah Morris. 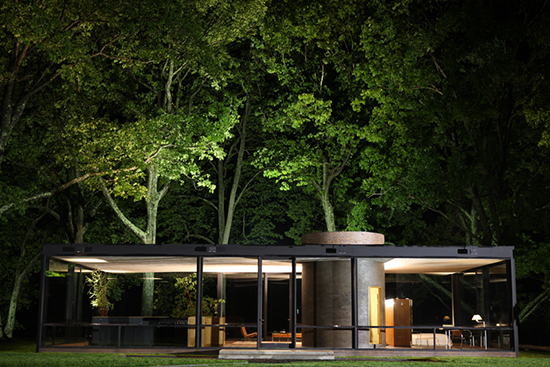 Points on a line is a portrait film about two pivotal buildings, the Glass House designed by Johnson in Connecticut and the Fansworth House designed by Mies van der Rohe in Illinois. The video, that is about a common vision, complicates the debate around the emergence, the publicness and autorship of an idea.

Coming to the method and the cinematic codes deployed it is interesting to know how Sarah Morris has filmed the glass surface of the two building and that's even more interesting in the light of the confrontation between the private and the public space that in both houses seems to vanish.

Our story ends where the cinematic codes meet the surface of two spectacular boxes; but to understand how architecture and mooving images had in those years the first interesting date might be a good starting point for further thoughts.

The interview was recorded on the occasion of the two Italian premieres of her recent films Points on a line and Chicago at Lo Schermo dell'Arte Film Festival in Florence.