The event cannot be considered apart from its representations...the eventhood is not defined by occurrence in time but instead by the production of unpredictable effects that contaminate or even constitute the experience of the event itself... [Andrew Stafan Weiner, Pretext: the evidence of the event]

With regards to improvisation in this piece Talk Show, of course we are dealing with a real person's life and there is fairly a big ethical issue involved in making a piece like that. I thought that first of all the notion that improvisation is essential to the story has a great deal to do with offsetting the power and the kind of exploitation that is involved in this piece: it is obvious that actors don't know the story and that they have to think really on the spot, in front of the audience, the fact that they have the power to change the story and the fact that they have to reinterpret someone's life and might do quite a nasty job in reinterpreting the story in a way that ethically is unaccettable; at least the notion that they have to improvise, that they are in the spot, offset some of their power or at least makes it more transparent. The idea that they are improvising is essential to making the piece more transparent and more complicated in terms of dynamics of power. [Omer Fast] 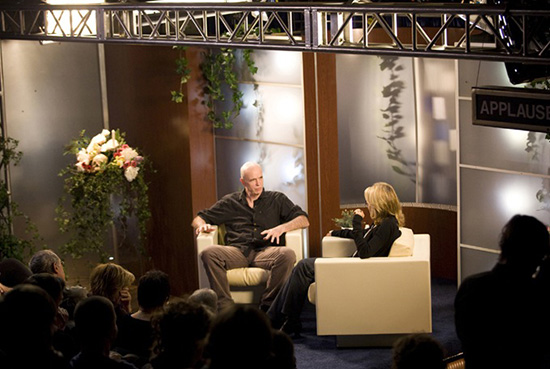 Omer Fast’s film Talk Show was commissioned by Performa in 2009 and it is co-produced by the Art Contemporary Israeli Art Fund, Edith Russ House for Media Art in Oldemburg and by the Goethe Institute. We met the artist in Florence where Lo Schermo dell’Arte Film Festival homaged him across the Mobile exhibition programme.

In Talk Show Omer Fast combines the familiar childhood game of Broken Telephone with the confessional talk show format: in a theatrical setting, invited guests recounts personal memories with direct links to current global events (the Iraqi War) as each guest begins to speak, an actor appears alongside, as an observer, listening to the guest’s account for the first time. When the guest finishes, the actor retells what he or she has just heard, while another actor listens to the account and subsequently narrates his or her own rendition of the story. The original memory spontaneously transforms to an almost grothesque version of it.

Starting from the notions of emphaty and power, loop and improvisation, ambiguity and loss of information, we talked about his video ouvre and his Talk Show.