Nikhil Chopra - A wayfarer wandering around fill with wonder

Nikhil Chopra's durational performances are a sort of boiled down history of art classes: very much informed by the western tradition, he manages to interweave live drawing (still life, portraiture, landscape, photography, installation and performing art), borrowing formal features from german expressionist theatre, fishing into the gestures' bank of Butoh dance, sharing values of endurance and non-permanance with hinduism and Nautanki teathre and that of sacrifice with christian ethics.

During the elaborate staged performances that last up to a few days at a time, Chopra forges and embodies various fictional identities, he puts himself in their shoes (and cloths and mustaches) referring to his personal muddy post-colonial upbringing, reenacting everyday rituals of transformation (shaving, whitening, walking) and common practices (eating, sleeping), keeping the distance from the audience (no words, no interaction), though engaging it in a deep gaze tension. 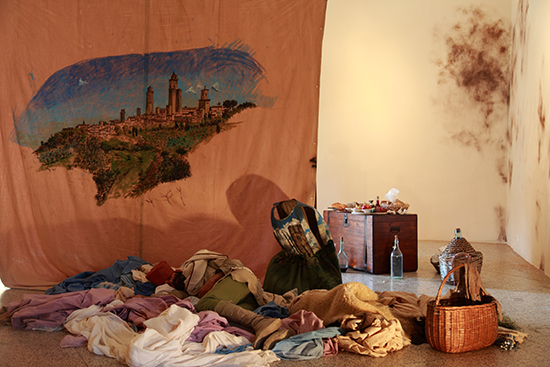 The enactments often cross the wall of museums and galleries and his personas walk real streets, live the public space and the surrounding landscapes. That's what happened in San Gimignano, where - invited by the Galleria Continua - he embodied - for 99 hours - a new carachter: a draughtsman, a wayfarer wandering around fill with wonder, a man who resembles what Giorgio Vasari wrote about Benozzo Gozzoli in his Le vite de' più eccellenti pittori, scultori, e architettori:

He who walks with difficulties along the road of virtue, even if it is both rocky and full of thorns, at the end of the climb finds himself at last in a broad plain, with all the happiness he yearned for. And looking down, seeing the cruel path he has trodden amidst perils,… with great contentment blesses those labours that had earlier caused him so much pain. And so making up for the suffering of the past with the delight of the present, without toil though he tries to make those who watch him understand how the heat, cold, sweat, hunger, thirst, and hardship he suffered to acquire virtue, may free others from poverty and lead them to that safe and tranquil state.

[who bumped into him between April the 25th to April the 29th must have thought that he was a mime, included in the touristic pack: towers, hills and mimes dressed in medieval garments!]. 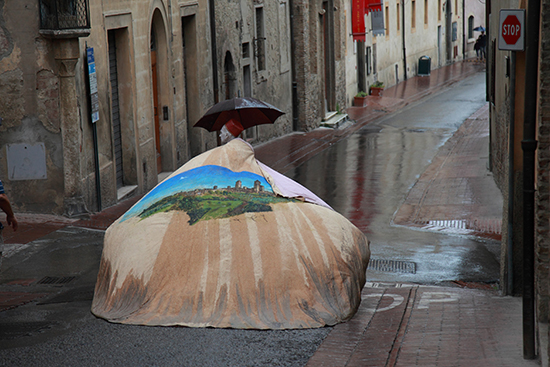 We met Nikhil Chopra a few days after the end of Inside Out - that is the title of a 99 hours performance - and we talked about his most recent practice, from Berlin (where he spent the last year, fellow at 'Interweaving Performance Cultures' International Research Center of the Freie Univesitat) to San Gimignano.

The music that goes with the interview is downloadable for free from Bad Panda Records website (take the mp3 and run).