I have now spent half of my life living in the West, so when I speak of work like Light Sentence as making reference to some kind of violence, I'm speaking of encountering architectural and institutional structure in Western urban environments that are about the regimentation of individuals, fixing them in space and putting them under surveillance. What I'm trying to say here is that the concernS in my work are as much about the fact of my origins as they are the reflection on or an insight into the Western institutional and power structures I have found myself existing for the last twenty-odd year.  [Mona Hatoum, Domestic Disturbance, intervista di Janine Antoni]

The video was shot with the help of a doctor using an endoscopic camera. It didn't hurt at all...I called it Corps Etranger, which means "foreign body", because the camera is in a sense this alien device introduced from the outside. Also it is about how we are closest to our body and yet it is a foreign territory which could for instance be consumed by disease long before we become aware of it. [Mona Hatoum] 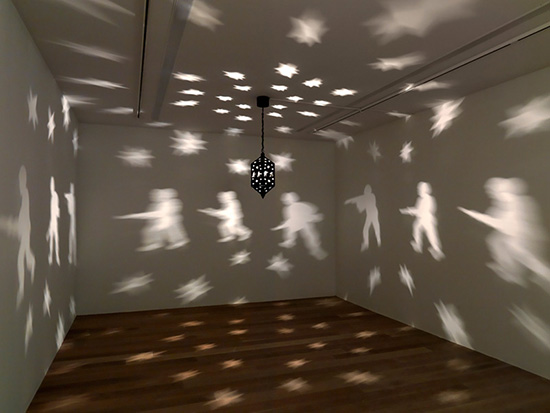 Angela Mengoni is a scholar in Semiotics and Theory of images; upon Radio Papesse’s invitation she interviewed Lebanese-born Palestinian artist Mona Hatoum, and taking the cue from Misbah, Hatoum’s installation at the Palazzo delle Papesse in Siena – the title means lanten in Arabic and it comprises a brass cut-out that spins a sets illuminated stars and soldiers into motion on the walls of a darkened room – she addressed the artists a few questions around the topic of the ambivalence of perception in many of her works and about her research on the body and the diverse power structures that are mirrored in it.