We met Kara Walker in Turin, Italy, where the Fondazione Merz just inaugurated her solo show and involved her into an articulate project - curated by Olga Gambari - that deals with stereotypes, sylhouettes, narrative imagination and empathy.

Here below you can find a sort of index of our interview:

- the discussion around Kara Walker's work often lands on the uncertain realm of fictional memories and in turn the memoire - as a genre - has been investigated in relation to both the feminist and the minorities connected literature. Even if Walker's work can't be limited to what concerns the afroamerican history and it is not reliable as an historical document, both the oral tradition of storytelling and the slave narratives are at the core of her historical reading. We asked Kara Walker how memoires enter her research and how their legacy have affected and do still affect afroamerican self-representation. 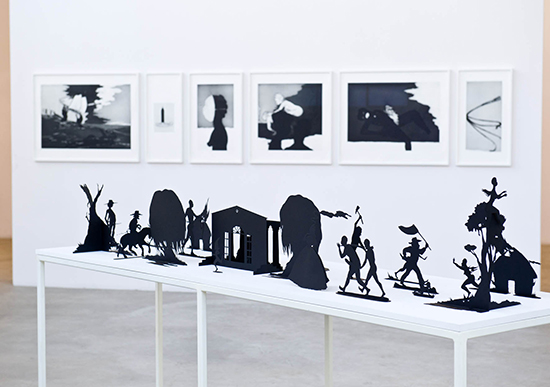 - in Untitled storyboard - that narrates, throughout 14 drawings and texts, the ambiguos love story of a slave and her master aboard a slave ship departing the African shores toward America - Kara Walker deals with the waving and shifting ambiguity of power between the oppressor and the oppressed, between a man and a woman.
Furthermore she gets closer to the entity Africa, whose dreamy image is also visible in the An unpeopled land in uncharted waters series, and here she comes to explain the role of Africa in her work and the sense of personal longing and search for identity that come with it.

And again, talking about Africa and its intersection and frictions with the European stereotyping perspective (it is not by chance that she has choosen Pittore in Africa by Mario Merz as a work to dialoge with) we would like you to listen to a brief extract out of the public talk between Kara Walker and Richard Flood that inaugurated the Silhouettes and Stereotypes conference hosted by the Merz Foundation. They discuss about European modernism and primitivism and about her effort to colonize the colonizing space of European institution focusing onto African arts. - one of the recent works presented in Turin is a series of 8 gouache on paper titled 30 strokes. In a very seductive way Kara Walker reports the banality of evil, depicting the collective guilt and shame of a series of public lynchings throughout America led by ordinary people and documented in the Without santuary series of photographs and postcards. But as usual it is never as simple and black and white as it might appear. This series is infact also a reflection on the relation between the author and the object, on her own fears of making paintings.

- Kara Walker took also part into the Pictures of You workshop, a two-day exercise in the exploration of human empathy through artistic and narrative means. The workshop rounded around the idea of 'narrative imagination' and our ability to empathize with others and the means through which the exercise took shape were the so called orphan photos, those nameless pictures capturing personal memories and unknown stories. We asked Kara Walker what is the value of photographs when people decide to get rid of them, letting their memories be orphans and anonimous. What came out is a reflection on the reliability of photographs.

- and again, we talked about empathy (and its contradictions) that is the lens through which we can read Kara Walker's work.

The music that goes with the interview is by James Gardner, from the album Giraffe, released by 12rec.com.