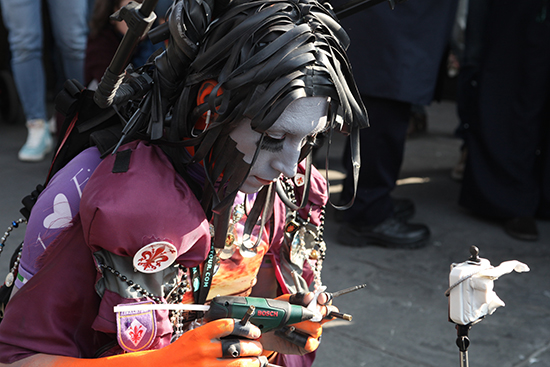 Johannes Paul Raether: first of all, to maybe explain a bit, I make figures that I work with, that are my tool: I call them identities, figures, characters, many words. When I first came to Florence for Renaissance Resistance - the first part of this conference which is happening now - I did some preliminary researches in the city center and a lot of the ideas, a lot of the observations and the interests that I had collected over the last years kind let me to this moment of realization that Florence would be the perfect place, the perfect city to make a new figure, which doesn’t happen too often, it happens maybe every tow years that I make a completely new life that I’m basically crystallizing as I call it.

All of my identities that I’ve done before, happened in Berlin and are very Berlin based, and this one was the first one that I though would be born or crystallized somewhere else. And for myself, this is was a surprise because I didn’t think of Florence or Italy, even Europe at that time - I was travelling a lot outside Europe - as the site where I should have such a birth moment.

I might say that the streets of Florence, with this amazing landscape of high and low - as I would want to call them - between ancient artifacts - the cradle of European culture - but also the contemporary street life with its millions of replicas, the visibilty of migration presence, with a tremendous internationality of the customers or users of Florence - which we sometimes also call tourists - for me were like an incubator, burning glass, magnifing glass for globalized contemporary culture. So I decided to give this magnifing glass a little being that could grow from it.

What’s its name? Schwarmwesen and you might get to know more about Raether's brand new figure in this interview, recorded in Florence on the occasion of Unmapping the Ranaissance, a symposium initiated and organized by Mariechen Danz (artist), Angelika Stepken (Villa Romana, Florence) and Eva-Maria Troelenberg (Max Planck Research Group at the Kunsthistorisches Institut in Florenz).

Johannes Paul Raether has been fellow artist at Villa Romana, Florence, in 2015. With his system of identitecture he creates unlikely characters that have taken on lives of their own and multiple identities: among them, Transformella, who firts appeared in 2010, Protektorama a kind of world healing witch born in 2011 and Schwarmwesen, each figure with its own set of skin colour, material, fabric and performative objects.

These caracthers animate and anticipate future identities and involve the visitor in confrontations about self-determination, gender and the future that are magical and critical in equal parts. His performances and installations have been shown at institutions including the NBK, Berlin; the Kunsthaus Bregenz; Platform Garanti, Istanbul and the Kumu Art Museum, Tallinn. He regularly writes for Texte zur Kunst and was one of the operators of the project space basso in Berlin.