Slogans do not describe the world, they call up a new world to take its place. [Freee Collective]

From the Liverpool Biennial.

Among the artists invited by international curator Lorenzo Fusi, Freee Art Collective - Dave Beech, Andy Hewitt and Mel Jordan - stands out for its critical approach to the commodification of the public sphere and for their attempts to colonize the same communication means usually monopolized by advertising and commercial companies. And if advertising is very often anonymous, paradoxically faceless and univocal, Beech, Hewitt & Jordan are concerned with the kind of communication that claims for a response, for a critical confrontation and debate, with a process of destabilizing the dynamics of public opinion.

In order to do that they use a wide variety of viral media and conceptual interventions, coining provocative slogans - a kind of language that was born political - that ask for a critical response from the reader and with which they occupy public spaces:

there are two economies (of the public sphere). The one handmade of individuals or small-groups who make protest and therefore visualize themselves or speak for themselves with banners and flags and there is the official expensive advertising public sphere. In the past people suggested us that we should only occupy the inexpensive handmade economy that is where our kind of idea belongs to but we have always refused that; we think that all the advertising spaces that are left in the world should be colonized by ordinary people and not monopolized by big companies.
We resist doing things like graffiti that brings protest into something that is illegal and unofficial. What we should do is to nationalized all the advertising spaces and make them available to everybody to share their opinion and have their debate in public. That is why we occupy the official public spaces rather than going down on the streets, hidden, secret, nefarious. We have avoided to stay in the economy where we are supposed to belong to.

We have always argued that if you make art of any kind of culture that is political, then it has to be twice political, in what you say but also in what you do. That's why in the images you see us appear, it is not the slogan on its own, we have to be part of it, we have to performe the slogan and that's part of our politics of embodied politics. 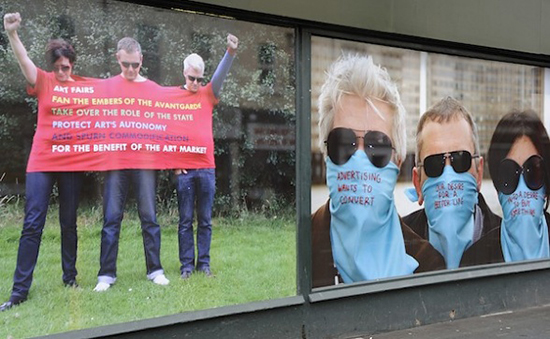 In Liverpool they showcases eight slogans - among which Don't let the media have the monopoly on the freedom of speech, Advertising wants to convert our desire for a better life into a desire to buy something, Advertising for all or for nobody at all, Reclaim public opinion - that fill a whole row of windows along the ex Rapid Store building in Renshaw Street:

you can say that this is like having an album instead of a single and the single is a kind of ok, you can like it or not like it but the album is richer because you start relating one thing to the other. What it is interesting for us is that it makes people look at the work in a different way; instead of just beeing about thinking of what we are trying to say, when you have several different slogans pulling in different directions then I think people have to start looking in a much more complex and much layered and new way rather than thinking that we are saying one thing.

We met them and we talked about public sphere, public domain, about the beauty of commitment and slogans, about the differences between their use of this language and the kind of truisms and statements used by Barbara Kruger and Jenny Holzer, about the 'manifesto' format - by now they have released The Freee Manifesto For the Alterglobalization of Art, The Freee Manifesto For Guerrilla Advertising, The Freee Art Collective Manifesto For A Counter-Hegemonic Art and The New Futurist Manifesto - its formal complexity and how it can be balanced by the flexibility of those contents that very often are successfully turned into slogans.


The music that goes with the interview is available at kirstenpostcard.com. The selection is made up of two cover songs by Hell on Wheels; one is The logical song by Supertrump , the other one is Holiday song by the Pixies.