Doris Salcedo opened the third edition of the Contemporary Art Festival in Faenza, talking about Shibboleth, the subterranean cut with which in 2008 she wounded the entire floor of the Turbine Hall at the Tate Modern. In conversation with Carlos Basualdo, she talked about the memory/legacy of the museum itself, she explained how she decided to work on the origins and the actual nature of the building as a way of addressing the ideological imperialistic roots of modern Britain.
She also talked about memory, monuments and memorials. 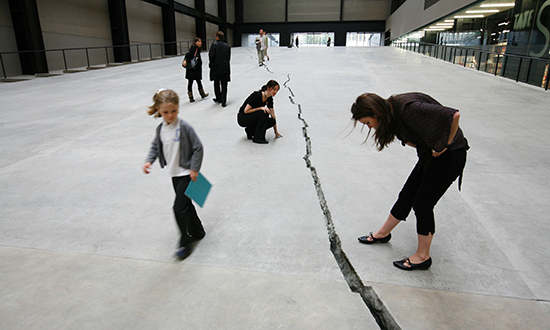 In this brief interview, she singles out the artist's responsabilities in narrating History through individual painful events, in giving voice to those who are not heard and seen. She says:

When victims are capable to narrate their own lives, then life continues; just the very fact that those stories are told is a continuation of life. We can't narrate those stories in a fancy and wonderful way because life was not like that and we have to be faithful to its nature, but as long as there are artists, writers and thinkers narrating history, life continues and that is exactly where hope resides.

Doris Salcedo was born in 1958 in Bogotà, Colombia. She earned a BFA at Universidad de Bogotá Jorge Tadeo Lozano (1980) and an MA from New York University (1984). Salcedo’s understated sculptures and installations embody the silenced lives of the marginalized, from individual victims of violence to the disempowered of the Third World. Although elegiac in tone, her works are not memorials: Salcedo concretizes absence, oppression, and the gap between the disempowered and powerful.