The New El Dorado, the video work Common Culture respond with to ACAF's invitation at Manifesta8, is one of the most selfcritical and relevant remark on the theme of the biennial, which, if supposedly dialectic in terms of curatorial practice and approach to the host region - seems instead to be missing the point of the dialogue. The video narrates the encounter between different culture, recurring to the cultural cliché of british tourists in Spain, but is also their own comment on cultural consumption and about themselves being part of an encompassing system of commodification of culture.

The video is a multilayered narration in which the front stage and the back stage of a film set blur, the limits between fictional characters, their personal comments and the artists' voice are ambiguous. Three men, in florished 1970s style disco "uniforms", stand at the edge of the dance floor; their ridiculous and unconfortable posing is awkward and they are engaged in an animated but predictable debate on immigrant workers' exploitation and the controversial social role of art and its roaming international community. Intermittently, the camera shifted onto a seriously dressed man who seems to plays the role of the chorus, addressing their performance and commenting on it. 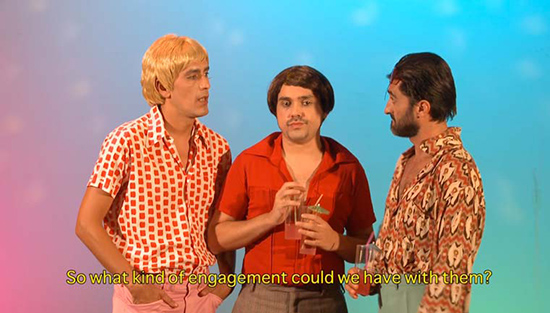 The New Eldorado is part of Overscore, the exhibition curated by ACAF at the Antigua Oficina de Correos y Telégrafos in Murcia.

The music that goes with the interview is lazy-ass strip joint out of the album Meteor Maker by Universal Constructors, available at www.jamendo.com. Some extracts of the spanish dialogue, taken from the original audio of the video, are added.

Here it is a comment Mark Durden sent me by email a few days after the interview. Due to a massive lack of voice he could had not taken part in the conversation but he had something to add to what David Campbell and Ian Brown told me about their work and practice:

Sorry I could not participate without my voice. A pity as we usually disagree and have an argument when we talk together. In terms of your question about surface and jokes, my reply would have been to point out how jokes are anything but surface in terms of their relation to the unconscious according to Freud and how in many respects our earlier work with comedians, Local Comics, accesses a warped subjective take on the world. There was the element of the confession there too. Our narrator does speak of the idea that comedy can act as a potential counterpoint to the cynicism. That you might laugh and have a response to our video is very important, especially against the seriousness of so much of the art at Manifesta. When I did try and intervene regarding what you called the cliché of one of our actors' references to African workers, I was trying to highlight how this confronts an impasse concerning the difficulty of making politically transformative art. 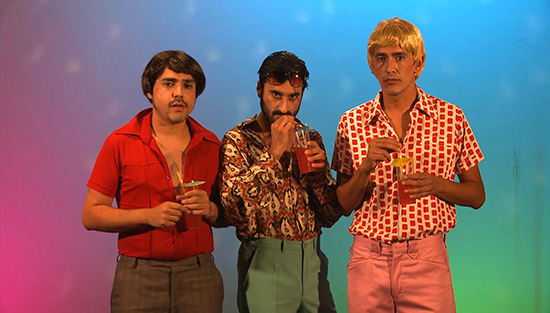