As for many works selected by Jota Castro for the Pabellon de la Urgencia – one among the others, Autosabotage, the controversial Tania Bruguera’s Russian roulette – also in Le ceneri di Pasolini by Alfredo Jaar, there’s a tight connection between ethics and aesthetics. The exhibitionThe fear society focuses on today social and political dynamics of fear and thanks to very critical works invites to reflect on new possible ways to construct the reality, on our own responsabilities in taking a position. 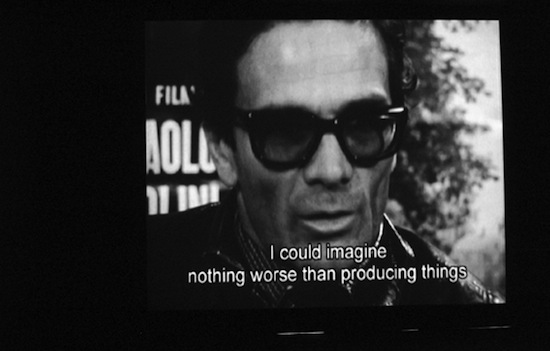 Le ceneri di Pasolini/The ashes of Pasolini is an homage to one of the most extraordinary Italian intellectual, killed mysteriously in 1975. He was a poet, a journalist, a director, fully and deepely involved into the political and cultural Italian debate. A complete intellectual whose free voice is today missed, a fearless man who took his risks, broke the rules and died because of fear. Alfredo Jaar says:  It is unclear who killed him but for me it has always been clear why: it was because of fear. Fear of his voice, fear of his life style, fear of his ideas. We have addressed Jaar about fear, about Pasolini’s legacy, about individual and social responsabilities, utopia, hopes and future.

The songs that come with the interview are ension is rising and Time to move and motivate from the compilation All's fair in love for wax, downloadable at www.phlow-magazine.com.