Bagni Lucia is a 3 chapter sonic plunge in our mobile and en plein air studio: next September we're welcoming you in Florence for a series of listening sessions together with Cristina Marras and Marco Stefanelli.

On September 3rd [6.30 pm and 9.30 pm] at Villa Romana, on the occasion of its annual Open Studios night, we will listen to stories about nature, trees, ashes and new lives. On Wednesday September 7th [6.30 p.m.], at Manifattura Tabacchi, we listen, walk and imagine new ways of exploring and journeying in space, the one close to us and the sidereal one. On Thursday 8th [6.30 pm] the program wraps up at Manifattura Tabacchi with lost tales and rediscovered voices. 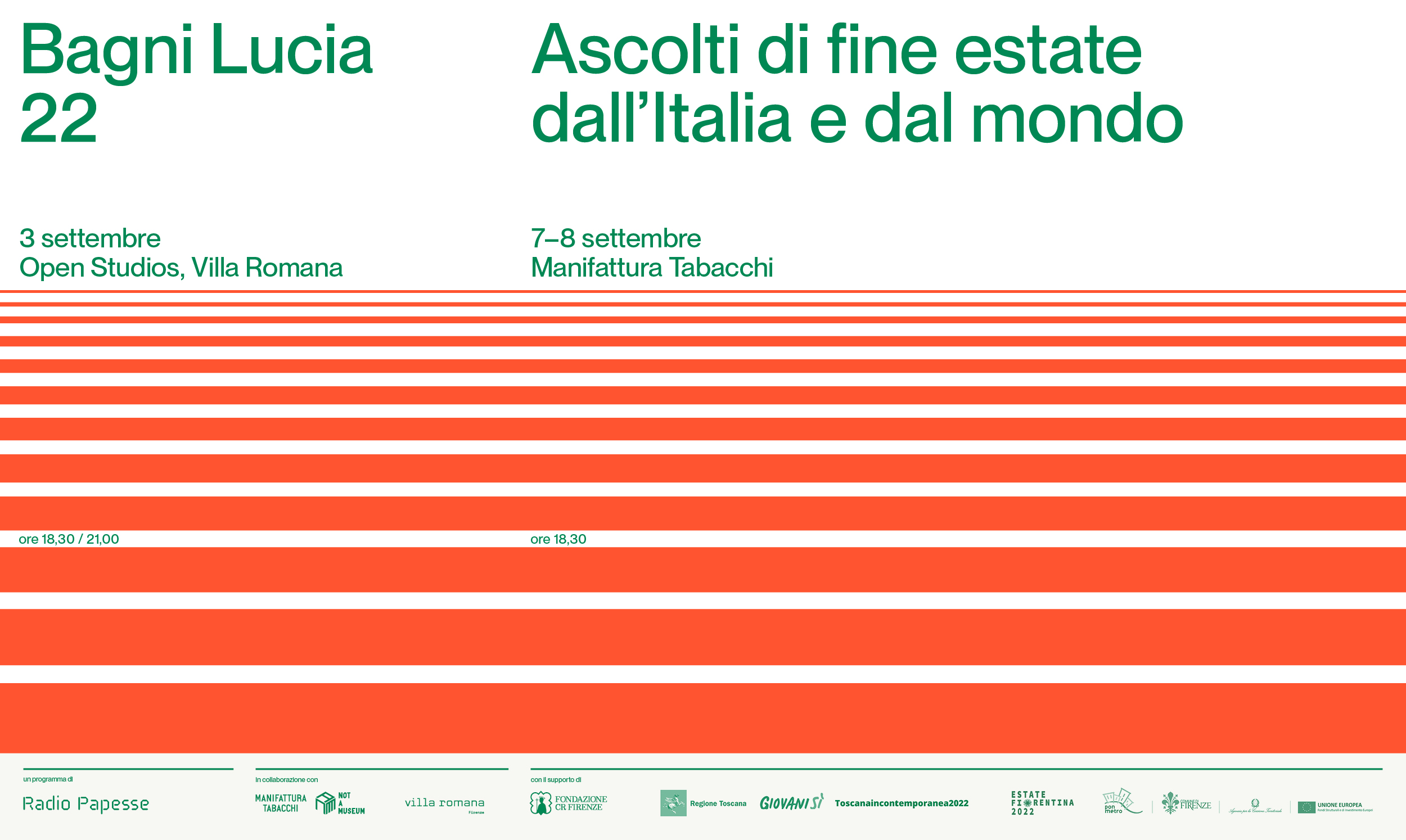 
On 24 July 2021, in the Montiferru area, in the centre-west of Sardinia, a fire of unexpected violence destroyed 20,000 hectares of land, perhaps changing forever a landscape rich in forests and a local economy based on the cultivation of olive trees. Fires on the island are nothing new: every year something burns and last year was a season of fires all over Italy and in various parts of the world. Climate change and lack of care for the environment are turning our lands into desolation heaths similar to a lunar landscape.

There’s a garden between the buildings. At first it was probably planned and landscaped. Then the plants (largely bushy, ornamental) grew naturally wild. Maybe someone threw an apple core out the window one day. A shy apple tree has grown, nothing more than a handful of twigs. This year it bore fruit: four apples. Usually, not much comes out of apple seeds. Apparently this time it has. It usually takes between five and twelve years for the apple tree sprung from seed to bear fruit. ‘Applecore’ is the story of the apple seed that sprouted in a wild garden between buildings in Berlin.
This sound piece was commissioned by SEMI SILENT in the frame of the 2021 edition of SONIC FUTURE RESIDENCIES.

In 1954, a woman was woken from her nap on the couch by a meteorite crashing through the ceiling of her home, bouncing off the radio and eventually hitting her body. The re-telling of this famous tale is intertwined with notions of care, protection, and daydreams, all the while wondering: what is between us and the space rocks rushing through the universe?

Meteor Bodies is a dreamy afternoon rumination on celestial, atmospheric, and human bodies.

Beaux Jeunes Monstres (Young Beautiful Monsters)  is the story of William, a young boy who suffers from cerebral palsy, who tells us his life. From his birth to his emancipation. From survival to liberation. Beaux Jeunes Monstres is a tribute to the invisibles. A voice for those we do not hear, a place for those we do not see. It is the story of an uprising, a revolution even. The kind of revolution which keeps the world spinning. And sometimes put it upside down. And change things, for ever.

Shamailang is a five-episode series that explores the story of Roger Sciama. Born in Egypt in the 1920s, Roger became the person to make import-export businesses with, between Italy and Afghanistan in the 1950s and 1960s. He soon after arrived in Milan, where he remained until the end of his life. Roger was Jewish, born in Egypt to parents of Syrian origin, but had an Italian passport. Through his adventure, this audio-documentary aims to reflect on the impossibility of defining a priori a person's identity and right to belong to a specific nation or culture, on the complexity of individual histories, which are extremely stratified, and on how their plots and trajectories meet and intertwine with the threads of history and geopolitics. 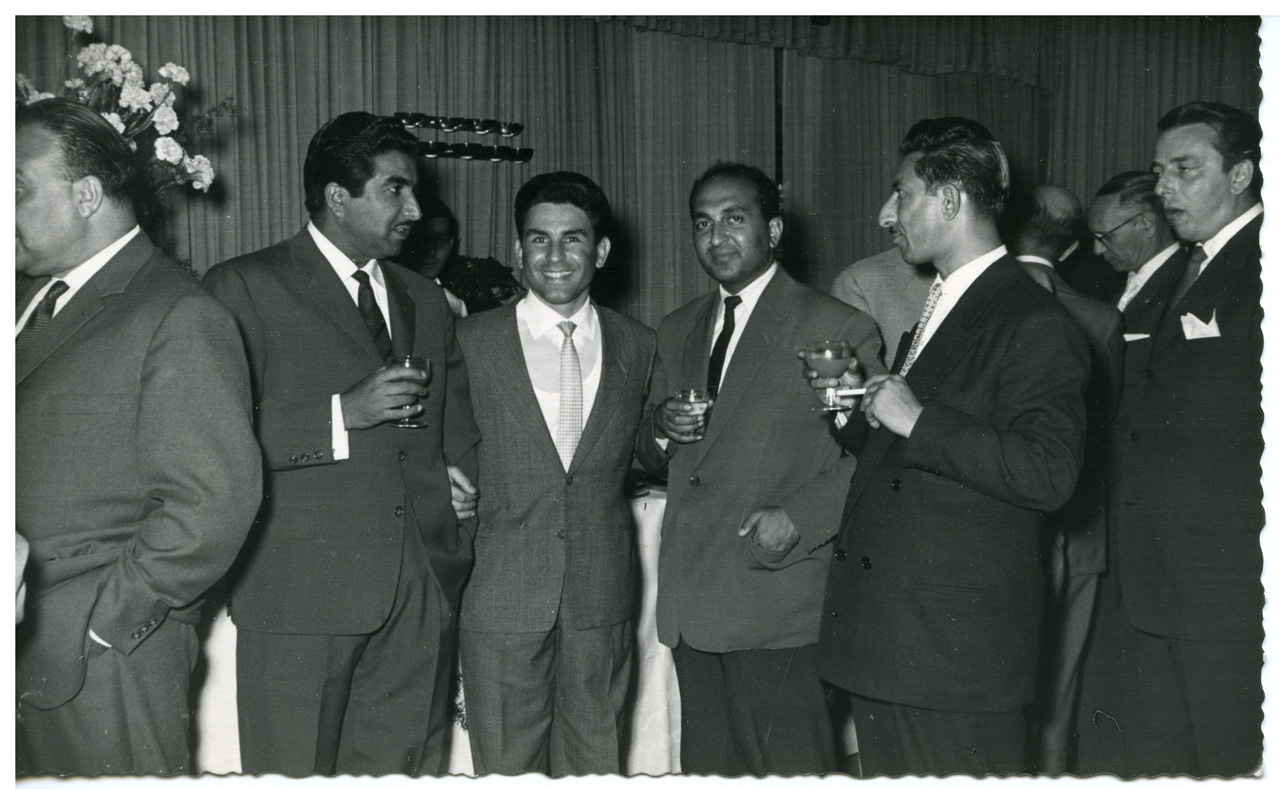 My Loss Will Be Your Gain
by Davide Tidoni

The material for this work comes from a tape cassette that Davide Tidoni found in a derelict empty house. The material consists of a series of recording-tests performed by the woman who used to live in the house. The title of the piece – my loss will be your gain – refers to the accidental discovery of the tape after years of abandonment and neglect.

Second Prize at the UK International Audio-Drama-Festival 2022, Mondi possibili - A Co(s)mic (S)trip is structured like a comic strip in the form of a Baroque opera. A space voyage that began inside a toilet bowl, leads an astronaut to stroll around the solar system and beyond, discovering a universe populated everywhere by armed revolutions, wild and domestic animals, bizarre characters: a digital hostess, Galileo and Aristotle, a phantom Houston, a philosophic interpreter who speculates on a new, quasi-scientific theory – the Cosmic Toilet – according to which, if everything is relative, everything is really relative.

Mondi possibili - A Co(s)mic (S)tripis also an invitation to play with forms, to measure ourselves up against the hybrid, to break with the rules, all the while maintaining a classical rigor.

On a day like any other, the assembling of the Ikea Lillåsen desk. She is busy with the parts, fortunately only a few, she puts them together on the wrong side and, so as to comply with the instruction manual, she does not use the Allen wrench. She is not clever with that: she bustles about and then she starts over each time, she thinks about the Sundays spent in the stores of the Swedish colossus and to the last European football championship. Meanwhile, the time goes by and she is left with some pieces in her hand, just like it happens with human relationships: she is too slow to do what she feels and too afraid of making a mistake. She wonders about the perfect fit, instead the key to put the desk and the hart relations together is in the little parts, in the screws that unite. Metaphors aside, it is in the patience and passion pushing us to try again. The Lillåsen desk is now ready, and I can finally welcome it home and tell a story.


The Walks
by Rimini Protokol

Walking in public gained new meaning with the pandemic. An ancient and every-day ritual became an integral part of the new normality. People meet, walk, stroll through districts, play in landscapes, and perceive their environment anew with every stride. The Walks is an app with a collection of audio walks by Rimini Protokol.

Each walk is a short audio experience covering specific locations in your city and an invitation to rediscover and interact with your environment. It only takes 20 minutes to do an audio walk: the stories and soundscapes in the short audio experiences are global in scope. The Walks connects people around the world in a local experience via the fundamental human act of walking. The Walks grasps walking as a theatrical scenario – an audio-guided walk in parks, a staged walk in supermarkets or timed interactions on waters. In every city, voices, sounds, and music turn familiar places into sites and landscapes into stages, step by step through storytelling, dialogical situations, choreographed discoveries, or musical and rhythmic variations on walking.